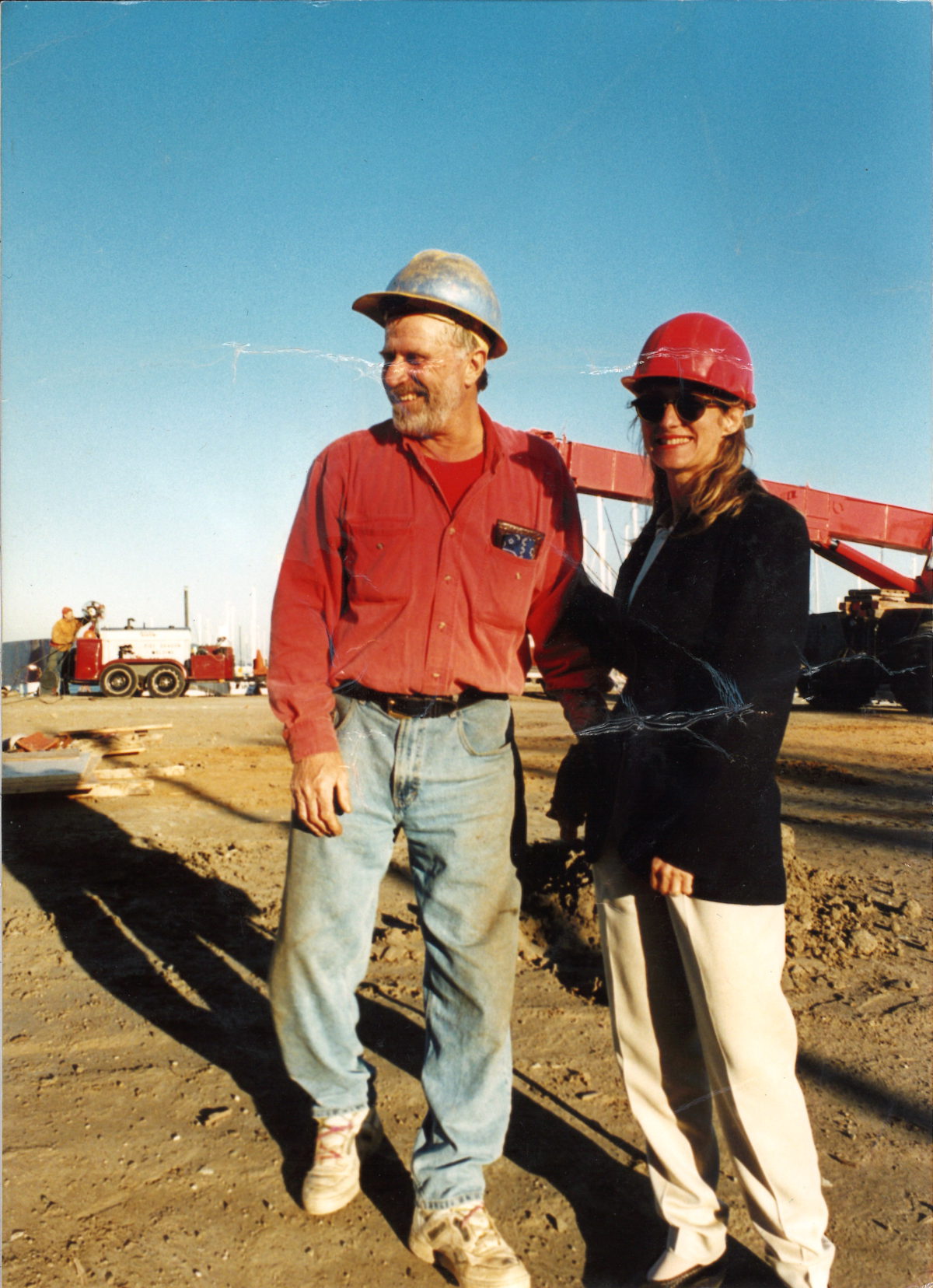 Ten days before California re-opened, I video chatted Jill Manton, the Director of the Public Art Trust for the city of San Francisco. Formally known across the city as one of the key women who shaped San Francisco’s public art history and informally known as one of its most revered fashion icons, I am honored to call Jill a dear friend and mentor of mine. We talked about her most recent projects, like the transformation of Treasure Island into a public art destination, as well as the legacy projects that made her—and SF—what they are today

AG: Tell me about your trajectory at the San Francisco Arts Commission…

The first program I initiated was in the late 1980s, and was the precursor to “Art on Market.” I negotiated for a voluntary allocation of $400,000 from MUNI. Posters in the bus shelters, performances, image projections… my intent was to share artists’ work in the public realm and to acquaint artists with the public review process. Get them used to their work being reviewed by a committee of peers. Most importantly, it was to integrate art into the life of Market Street. We had Joanna Haigood and her dance group do an aerial performance. A colleague of mine at the time was the Deputy Director of the Port of San Francisco, and he gave us permission to do that. It always helps to have relationships.

I also helped create an enforcement mechanism for the city’s 2% for art ordinance, which ensures that two percent of the construction cost of civic projects be allocated for public art. In the old days, when I first started, projects would integrate art at the end of the project once it was already built, so we were left with few alternatives to integrate art, except to try to find a way to have it make sense in an already built environment. Now we have artists conceptualize their work from the beginning of the construction process. I thought—and still believe—that artists see the world in a different way. Their unique perceptions would enable us to achieve the notion of designing a public place as a work of art as opposed to bringing an art object to a public place.

Aside from civic projects, I realized that there were millions of private dollars being generated every year for more visual art in downtown. But most of that money, if not all of it, was going to artists from out of the area. I created the Public Art Trust, but was told that I always need to give developers options, instead of telling them what to do. So basically it’s an optional program, and developers can contribute all or a portion of their 1% for art funds to the Public Art Trust.

In the late ’80s, I hired an artist to develop an Arts Master Plan for the Embarcadero Roadway. Out of that, the Promenade Ribbon Project was conceived as a two mile zone of artwork. The artists who were selected were Vito Acconci, who was a brilliant genius, Barbara Stauffacher Solomon, and Stanley Saitowitz. They conceived of the ribbon as a two mile, five foot wide, long, linear sculpture that ended up being a synthesis of art, urban design and infrastructure. It relieved the project of the need to provide benches and bollards. It brought illumination to the promenade. It was a barrier between vehicles and pedestrians. The conceptual premise of it was to illustrate where the land met the sea. It conformed to the historic sea wall that was underneath the Bay. Because of the design of the original Embarcadero, many buildings separated the pedestrian and viewer from the Bay, and precluded pedestrians awareness that they were at the edge of the sea.

I also initiated a temporary public art program in 2000, starting with a citywide Keith Haring exhibition of 10 of his sculptures.

What changes in public art have you seen over the years?

A sea change in attitudes. When I started, I had to fight for public art. People would say why do we need it? Whatever happened to statues of men on horses? Why not fight AIDS? Homelessness? Arts education in schools? We couldn’t use capital money that was associated with bond projects for any of those programs. And nobody wanted public art anyway. People were afraid of controversy. Temporary public art laid the groundwork for public art. People didn’t have to commit to liking it. It made it easier for people to re-engage with their environment in a new and different way.

I also brought the Zhang Huan three-head six-armed buddha to San Francisco’s Civic Center in honor of the 30th anniversary of the Shanghai-SF sister city. It was a hayday for temporary public art.

And, when I started there were few women sculptors. It was a male dominated field. But over the decades I’ve seen many more.

Tell me a bit more about the Public Art Trust you started.

Again, I’d like to credit Gavin Newsom. In 2006 I was asked by the mayor’s office to look at the 1% for art in private development. Like I said, it’s an optional program, and developers can contribute all or a portion of their 1% for art funds to the Public Art Trust. It can be used for temporary public art projects at the development site or within a half mile of the particular zoning. It can also be used for conservation projects by the Arts Commission, and to commission permanent public artwork.

One of my models was the World Trade Center in New York. They had a vibrant public art program. I called for information about their public art program and there was a recording:  If you’re calling about our performing arts program press 1, if you’re calling about our evening film series, press 2, if you’re calling about our temporary exhibition program, press 3. One of the  purposes of this program was to make the World Trade Center a destination. Many offices go dark at the end of the day, and instead this program attracted hundreds and thousands of people. The wine bars and the sandwich shops in the vicinity benefited. I had hoped that we could do something like that with the Public Art Trust.

Our first project is a permanent art project, funded by Emerald Fund,  on the western facade of the Bill Graham Auditorium. We Commissioned Joseph Kosuth to make WFT, the World Family Tree.  I always have to remind myself that it’s not WTF. It’s based on the world etymology of “civic” and “auditorium.” It’s elegant and educational… it’s transformed that street.

What is the public art program on Treasure Island?

I read about the Navy transferring land to the city in 2005. I knew enough about zoning and 1% for art to know Treasure Island was not part of the C3 district, where 1% for art is required. So I went to see a colleague in the mayor’s office to ask if he could stipulate that there be a 1% for art written into the development agreement, and if the Arts Commission could manage those funds. Then, in a bigger, bolder, what-the-hell-I’ve-got-nothing-to-lose move, I went to the Executive Director of Treasure Island at the end of 2013 and I proposed that the 1% for art in private development be used exclusively to enhance public art and the public realm, and not be used for private property. To my absolute surprise and delight, it was approved.

There are a couple of things I’ve learned in my career, Azule. Number 1, there is a very long pause between the idea and the reality, in city time. You have to be patient. I started this project in 2005 and we didn’t launch the Arts Master Plan until 2017. Number 2, I’ve learned to always ask. If you don’t ask you don’t know. I learned that a lot of our city partners will say yes. I’d ask things like, Could you have your contractor pour the foundation for the sculpture?

I also learned that Treasure Island was the largest allocation of public space since the Golden Gate Park. What better place to have a vibrant and robust art program? Treasure Island would be a destination for the arts. The Arts Master Plan that I wrote with the participation of the design team Included permanent artwork, temporary artwork, and all media. One of my goals, similar to the Public Art Trust, was to have artists benefit from private development. It’s such a different scale than public projects like recreation center. And not only is the idea of a program that includes performance and theater exciting, it’s just. And necessary. I wanted to allow artists in other media to benefit from the 1% for art programs. There will also be long term environmental art projects where artists can address unique conditions of Treasure Island like sea level rise and severe wind. The art program will be anchored by a series of large scale sculptures, the first of which is Hiroshi Sugimoto’s on Yerba Buena Island.

But I made a discovery with the Patricia’s Green site. When I was recruiting artists, I realized, who has a 20 ft tall sculpture just lying around for public display? Who has the real estate? Who has the expensive equipment needed? There is a certain amount of privilege associated with that. So I opened up the application to allow artists to propose new works that they would build with part of the honorarium.

What’s your favorite piece of art in the city?

Wow. I really like the Olafur Eliasson (which is not part of the Arts Commission’s efforts). I also really love the Keith Haring Sculpture at Moscone Center, which I was able to personally select for our citywide exhibit.

One of the challenges of public art, Azule, is that for many years, it was regarded as a bastard stepchild of the art world. But we’ve seen a change—and not just in San Francisco, but all over. Look at the New York Subway, or San Francisco Airport. There’s much less of the church and state divide between private and public art.

Fine art had acclaim and support in the fine art world as well as with the general public. That’s always been a goal. We want public art to be loved by the general public, as well as have that credibility. Not all works achieve that, but Keith Haring’s does. And Sarah Cain’s and Alicia McCarthy’s pieces in the air train at SFO [San Francisco International Airport] are spectacular. There are breathtaking works of art at the airport.

How about your least favorite?

There are a lot of works that I don’t like.

In some public art there can be a blandness because they’re decided by committee. Sometimes if we can’t reach consensus, then the two sides will agree on their alternate choices. It doesn’t offend anyone but it doesn’t excite anyone, either.

If you could have dinner with anyone who would it be?

What is your secret to looking so good all the time?

Eclectic taste. I like mixing things past and present. Reinvent clothing. Take something and add something like cutting off pants legs and having them remade as sleeves to a blouse. Most of my clothing is secondhand. Like mixing thrift shop and designer clothes. Instead of wearing dark drab clothing I want to contribute something bright and colorful to the streets.

Any advice for young people desiring a career in the arts?

Almost anything is possible. Be patient and think really big. 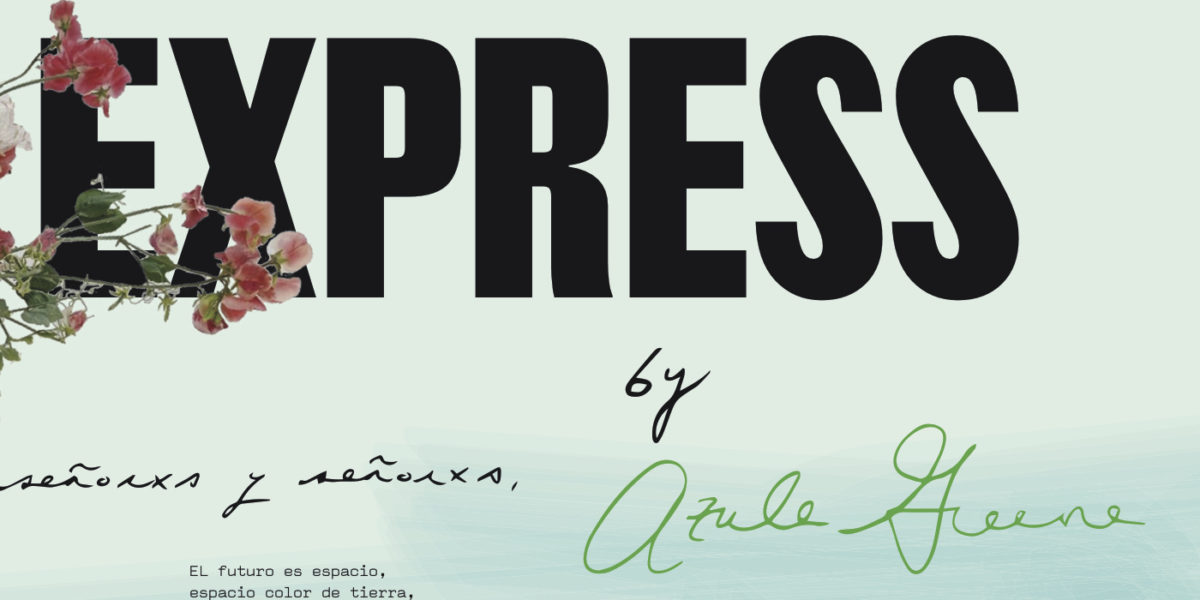 Fate of the City
Azule Greene 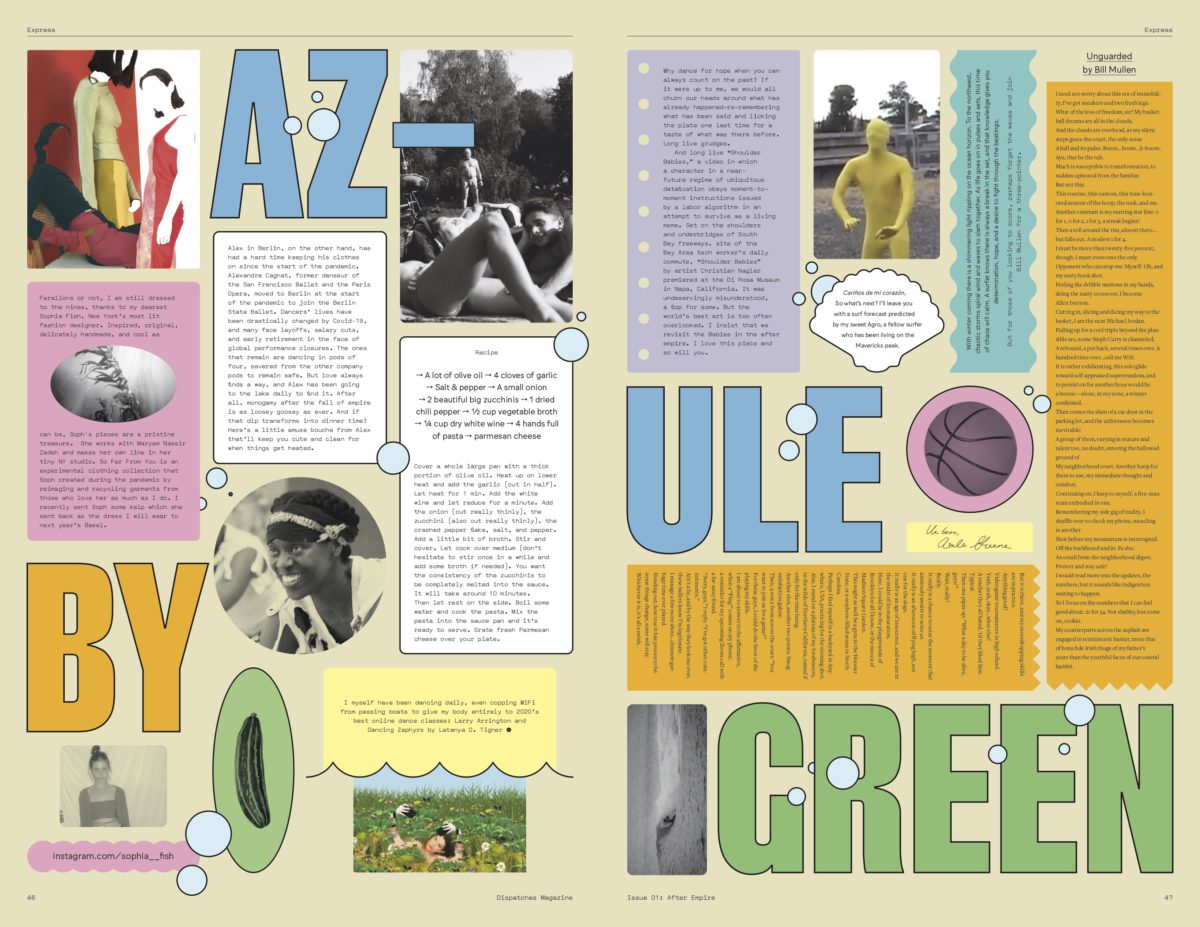