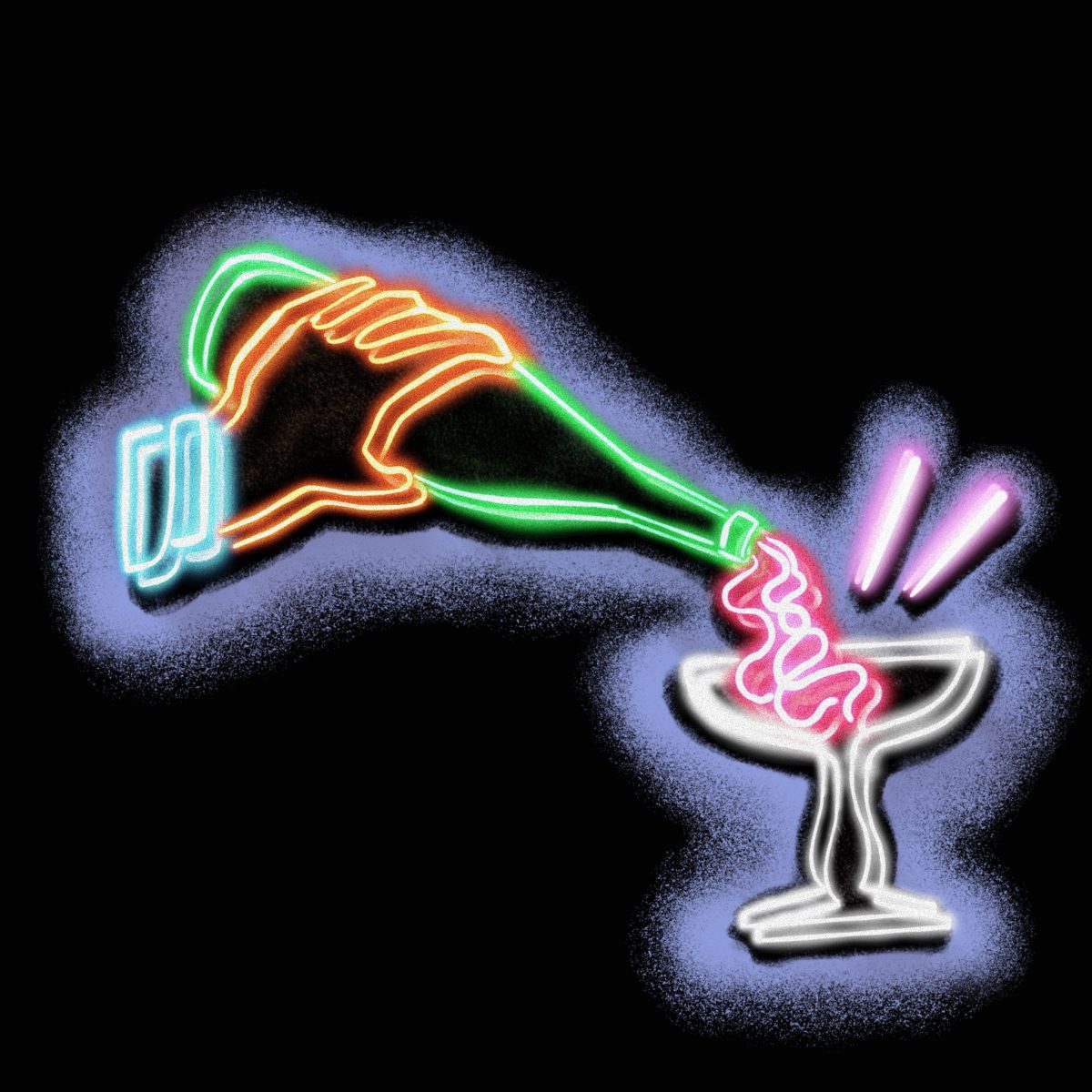 IN THE DESERT THE AC HIT HARDER. I still hadn’t got used to the blast, that immediate freezing feeling when the doors to some interior slide apart and announce the arrival of a new and colder climate. In the concert hall the temperature change was even more pronounced, and although this was my second visit in as many days, I still wasn’t quite prepared for the size of the shiver.

I’d seen the Elvis hologram perform for the first time the previous evening. Now I was back, alone and sober, certain I had finally found the opening to my next book. Sitting there drinking a Diet Coke, I was still stunned by how lifelike the hologram was. Elvis’s movements were so languid—so exhausted, so unwell—it felt pointless resurrecting him for the performance. Why bring a man back from the dead only to have him phone-in another average show?

The approach prioritized realism over spectacle, and the result was this believably middling, three-star performance by a spent Elvis Presley. It was sometimes as if we were actually watching him—the corpse—brought forth from his coffin stiff and fatigued to stagger through one final Vegas show. At a cost of millions, perhaps tens of millions, they had faithfully approximated the experience of seeing Elvis Presley on an off-day, which although realistic, was also realistically disappointing.

The one nod to the present year were his speaking interludes, in which he thanked American Express for making the show possible and encouraged us all to leave the concert hall to collect refreshments from the bar. Carefully listing the options—“Snapple, Pepsi, Dr. Pepper…”—he seemed grateful for the opportunity to cease moving. I got the feeling he wished the list would never stop:

But there were only so many to name, and after the audience clapped at the climax of the menu Elvis wheezed back into song. He seemed to be having great difficulty summoning the energy to care. Even during the sequences for which he had been programmed to appear more interested, he still appeared clinically depressed. This was faithful to the real Elvis, though, with his interest reading not as fake, but rather as realistically feigned, as almost any interest of Elvis’s did after about 1970.

The feigned interest, belying a hollow uninterest, was an intensely realistic breed of interest. This was how Elvis really looked in interviews, at awards ceremonies, and on the old tour t-shirts that stretched his deathless grin across chest after chest, clinging on in cracked pieces starting to fade after too many circles through suburban washing machines. Over three decades the music industry had slowly sucked Elvis Presley dry of any genuine feeling, so this sterile hologram of him was, in its own way, oddly loyal to the real man; it was just that the real man was for almost three decades a counterfeit, mimicking a prototype who had died long ago.

After the matinee I stepped back into the blazing sun and checked my iPhone. There was a message from my agent, Jay, reminding me that we had moved our meeting to three. I drove to the bar, passing the replicas of the Eiffel Tower and the Statue of Liberty looming over imported palms and more ads for AmEx. Spotify played through the speakers, with the joyless perfection of “Wagner,” “Eno,” and “Kanye West” bleakly underlining the appeal of two hours of Elvis butchering his hits.

Jay had been ringing for months, eager for a chapter, an excerpt—anything to show the publisher. I had reassured him that, eventually, something would get written because I had already spent my advance, but he insisted this was a non-sequitur. In his experience, he said, a client spending their advance was not a reliable indicator of progress. “Although,” he continued, “it might, in your own case, be a reliable indicator of your drinking.” But this was all moot now anyway as I had finally found an opening to the book.

I had come to Las Vegas to visit Tim, an old friend Jay and I had in common. But something was making me linger. Jay suggested “free rent,” but I suspected the truth was more complicated. I often wandered through Tim’s penthouse with a vodka searching for it. “What am I doing here?” I’d ask myself. “Why?” I found Jay sitting at a table in front of the roadside bar where we had agreed to meet, vaping in a synthetic vanilla cloud that didn’t fully part until a nearby fan swiveled in our direction.

“You told me this was a restaurant,” he said, as I dropped into the seat opposite.

“Are you hungry?” I asked him, looking around. “They might have nuts?”

He was beneath a parasol advertising Corona, himself sipping a Corona, while a device occasionally spraying water into the fan’s path coated him now and then in a cooling mist that clung briefly to his Ray-Bans before fading in the heat. I ordered a Corona also, before asking if he was able to expense this. He said he was. I stopped the bartender and asked for a vodka-tonic too.

Sometimes I flirted with sobriety, but still hypnotized by the image of the Elvis hologram splashing a whisky sour around as he mumbled over the occasional forgotten lyric, I saw that to accurately present my vision for the book I needed to be in a comparable state, leaning into these flaws and obsessions that connected the pair of us to our shared audience. Overweight and addicted to painkillers, the resurrected Elvis was real—even though he was dead. The sweat pouring down his face as he, nonetheless, barely exerted himself physically, represented a level of collapse that every spectator could relate to. Elvis re-introduced the idea of a human at the wheel—however ill and confused. I needed to do the same. I assumed Jay already sensed this, and appreciated the idea that in many ways I was ordering far more than a “Corona” and “vodka-tonic.” I was buying entry into something substantially bigger.

“You needn’t explain,” Jay said when my third Corona arrived.

“Alcohol is the glue that—”

“Travel, leisure, events,” I continued. “We buy into these things almost purely to have an excuse to drink.”

“Yes,” Jay said, blankly. “Yes.” He sipped his Corona. “Tell me about Elvis instead. The novel.

“The novella,” I corrected, mid-vape.

“I thought it was a novel? Something ‘Dickensian,’ you said.”

I had a sip of my Corona. “Maybe ‘biography’ is the correct term: ‘autofiction,’ whatever.”

“Writing memoirs, at your age. Is that normal? Are you dying?”

“Then why memoirs? You haven’t achieved anything.”

“What do you mean ‘achieved’?”

“I mean ‘achieved.’ You haven’t ‘achieved’ anything.”

“And it’s because my story isn’t notable that it has a chance to connect with a real audience.”

“But what is your story?”

“What my story is. What anyone’s story is.” I sipped my Corona.

“But what do I tell the publisher?”

“I mean what’s it about? What happens?”

“Something has to happen.”

“This is the locus of Elvis’s appeal today: people relate to how pathetic he is, not the ‘achievements.’”

“Maybe, but there are millions of us.”

“Millions of pathetic people—this is your audience?”

“You’re aware Elvis had an illustrious career, right? Before this?”

“I’m aware of his ‘achievements.’”

“It’s biography, Jay.” I gestured with my vape vaguely.

“But about nothing? About you drinking in Vegas? Watching an Elvis show?”

“Life is not nothing, Jay.”

“I think you could afford to be more ambitious.”

“There are enough biographies about people drinking.

“So what, a collection of short stories?”

“No. Another topic. I thought you emailed saying you were writing about Elvis? But now it sounds like you’re just writing about you, doing nothing.”

“It’s about both of us. Elvis is a metaphor.”

“That’s what you’ve been working towards for a whole year? A metaphor?”

“That’s what you’ve been working towards for ten months?”

“Yes,” I said. I checked the time. Elvis’s next performance was beginning soon. “I have to go.” I stood up and necked the rest of my Corona and the last of another vodka-tonic.

“Technology feeds our appetite for repetition,” I said.

“What are you talking about?”

I smiled knowingly, hoping that would be enough.

“What are you talking about?”

“Can we stay on topic for a second?”

“No.” I grabbed my keys off the table. “I’m already late. We’ll catch up after Elvis.” I squinted at the road.

“You’re too excitable when you drink.”

“No, they’re not. The opposite is happening. We are in the worst position we have ever been with this book. We need to sit down and think all of this through, very carefully.”

“Are you able to expense this?” I gestured at the empty bottles.

“You already asked me that.”

“Yes. But is driving wise?”

On the drive back to the concert hall I wondered if Jay was right. Maybe I had drifted away from my original intention. But this was a good thing. The idea of writing a sprawling novel—something Dickensian, about the human condition—had sharpened more and more exquisitely into its perfect expression in these memoirs focussed mostly on my time in the desert. It didn’t matter if it had been done before. Elvis meant something—as did the drinking. There was an opening in the combination of the two, a symbolic moment that would put the pair of us in conversation: me and the hologram. I called Jay.

“Maybe you’re right about the memoir. Maybe it is strange. What about a screenplay?”

“I don’t think you should be making calls while driving,” he said.

“But I can hear Elvis playing.”

“You’re both on the speakers.” A horn sounded while I passed a car too closely.

“How drunk are you?”

“It would still be me, still be real. We’d drive deep into obsession, just like you said.”

“I’m talking about drinking, about obsession, Jay. That’s what I want this screenplay to address.”

“Forget Dickens. A long-read. ‘The Writer in Vegas.’  Maybe that’s the perfect way for this thing to begin: as an article, in The New Yorker. We test the waters first and see if there’s the interest there before we waste any time on it. We get the confirmation. We can reach the maximum number of people this way.”

“Through The New Yorker?”

“The New Yorker,” I said, taking a right-turn.

“Sorry, I meant that as a question.”

“‘The New Yorker?’,” he repeated, matching my tone.

“But what’s your question? I don’t understand.”

“I guess that was my question.

“I wanted your opinion—a second opinion.” I overtook a Toyota. “The point is that we get this article out there, circulating, and once we know there’s interest then we can look at adapting it into something longer. I want to reach as many people as possible.”

“You were paid for a book.”

“And I’m on the verge of something bigger with this Elvis breakthrough. A new way of working.”

A Ford was moving too slowly ahead of me and I ran into the back of it, crumpling the hood of my Mercedes. I lost Jay. Elvis was still struggling through “Suspicious Minds” on the stereo, his voice increasingly garbled by a disruption in the circuits. He sounded like he was dying in some slow and uncomfortable way. I pictured him on stage, squeezed into his white jumpsuit. Next there’d be a song from another decade that, just as garbled, might nonetheless offer a sense of continuity. A man in a cowboy hat was screaming at me through the steam clouding the windscreen. I guessed he was on his way to Elvis too.

Yoel Noorali is a writer living in London, England. He is currently at work on his first novel and a collection of short stories. 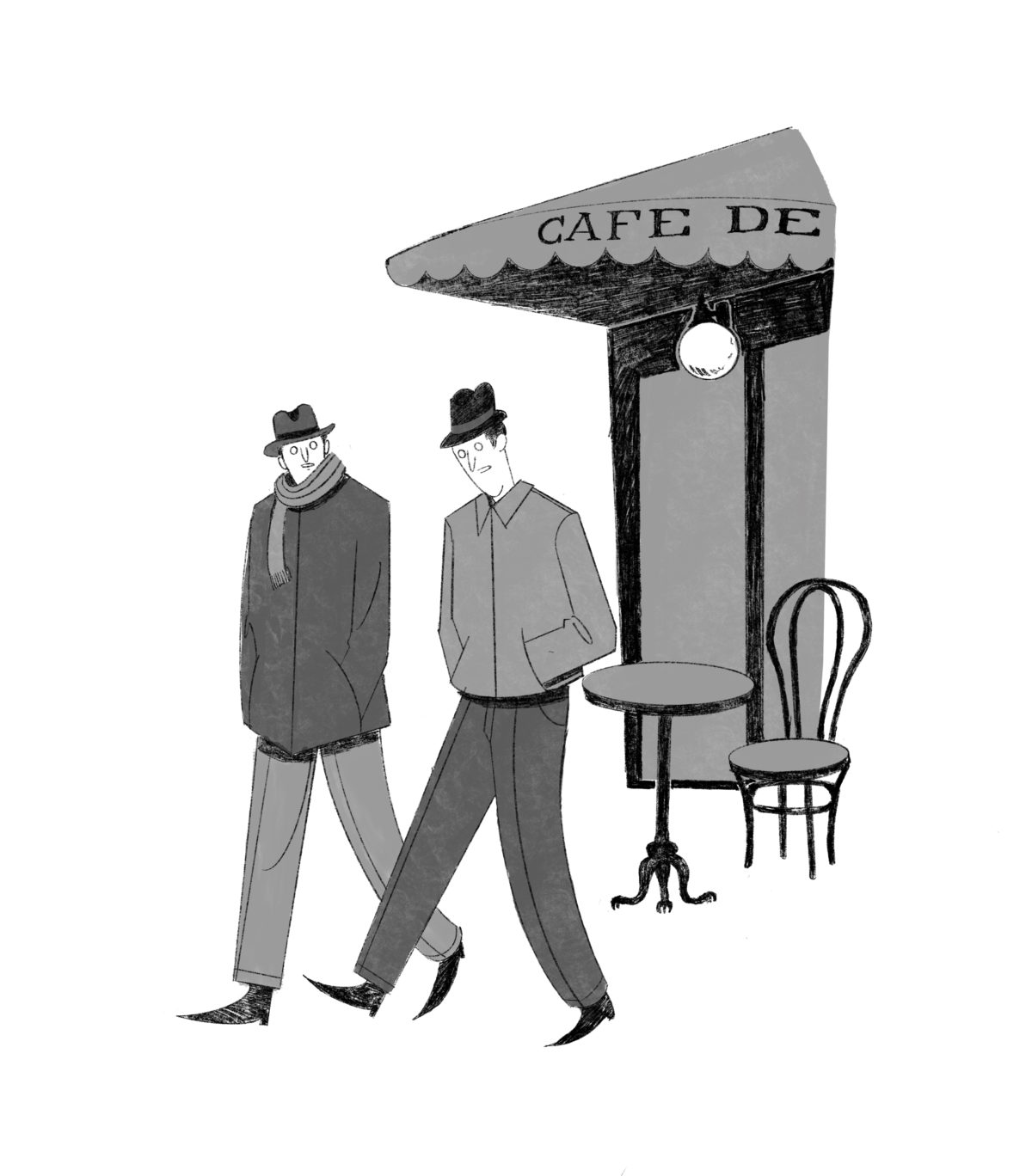 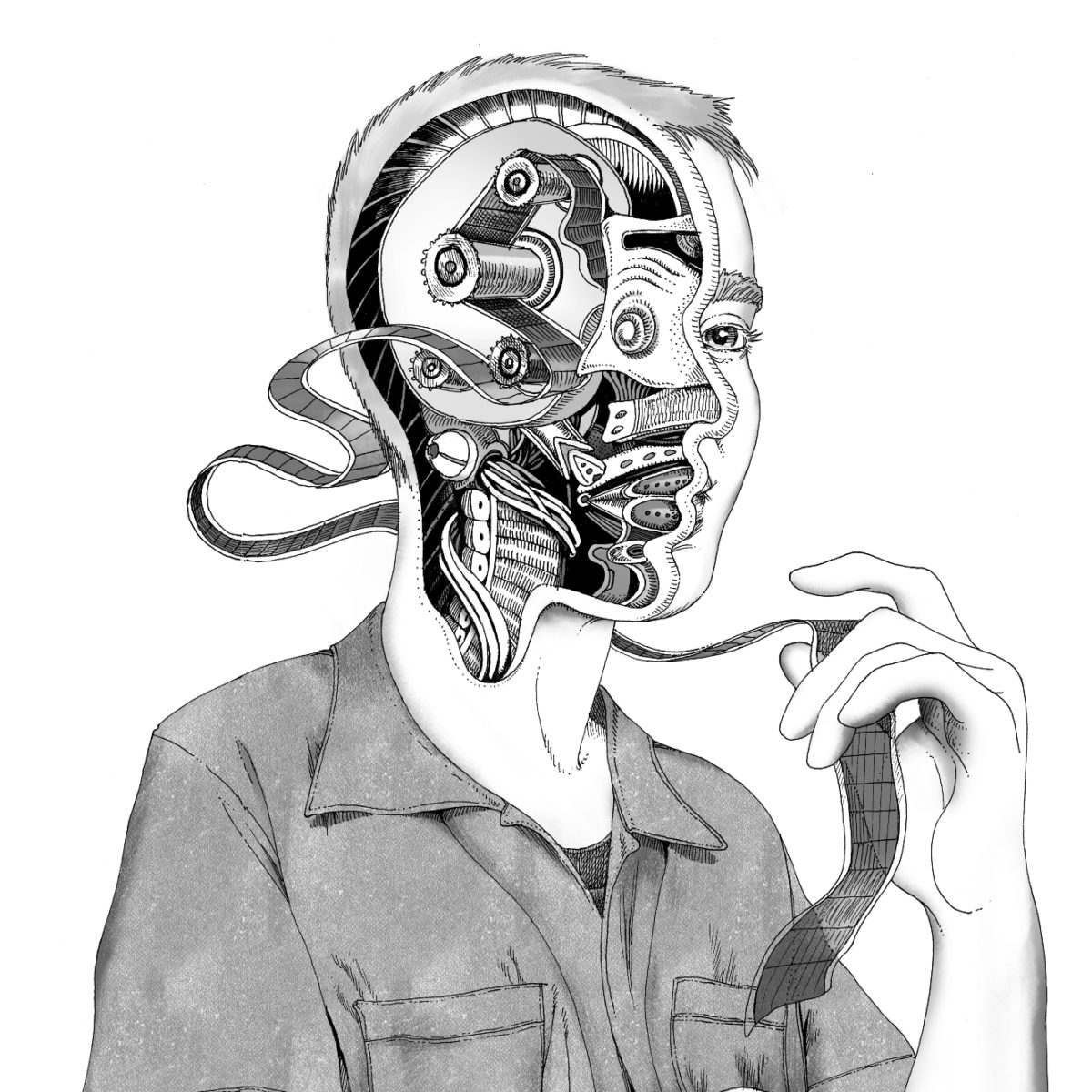